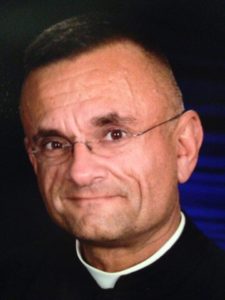 Fr. Steven C. Amo is the first son and eldest of 4 children born to Edward and Rosemary Amo in Holyoke MA in 1963.  Upon graduating from Holyoke Catholic High School in 1981, he went on to attend St. John’s Seminary College in Brighton, MA earning his Bachelors of Arts Degree in 1986.  He returned to home for upon completion of his studies there and worked for Monarch Insurance Company.  After a two year period, Fr. Steve knew his place was in the seminary so he entered in 1989 to Mt. St. Mary’s Seminary in Emmitsburg, MD.  In 1991 he earned his Masters of Divinity and in 1992 his Masters of Arts.

Fr. Steve was ordained on 12 September 1992 by the Most Reverend John A. Marshall, Bishop of Springfield. The following day, he celebrated his first Mass of Thanksgiving at his home parish of Notre Dame de Perpétuel Secours in Holyoke.   His first assignment was to St. Charles Parish in Pittsfield as a curate.  In 1994 he was transferred to St. Thomas the Apostle Parish in West Springfield for four years.  In 1998 Fr. Steve was then sent to the parish of St. Francis of Assisi in Belchertown for a period of two years during which time he also covered for several months as chaplain at Baystate Medical Center in Springfield.  Following his assignment in Belchertown, Father went on to assist Fr. James Scahill in St. Mary Parish in Springfield.  In 2002 he was called to become the parish priest of All Saints in Agawam and assuming part time duties of priest chaplain at Mercy Medical Center.  And in April of 2008, Father Steve was given the responsibility of Administrator of Sacred Heart Parish in Feeding Hills in addition to All Saints which was suppressed in January of 2009.

Coming from a long line of church organists, Father learned the piano while in grammar school from his Great Aunt Helen Ezold (organist at Sacred Heart in Holyoke) who then taught him the organ.  He became the organist of St. Jerome in Holyoke beginning in his sophomore year of high school.  He continued throughout college and seminary to play at various Masses and liturgical services.  Although he no longer plays as much as he would like, Father Steve enjoys music and singing especially when celebrating Mass.

In addition to his dog “Buddy” (a bichon frise), Fr. Steve enjoys gardening, biking, and other outdoor activities